What Do Little Girls Really Learn from “Career” Barbies?

Like a lot of moms, I faced the Barbie dilemma when my daughter was younger. Ultimately I  figured a little bit of Barbie would sate her appetite (and stop the nagging) without doing too much harm. Like a vaccination, or homeopathic inoculation against the Big Bad. I told myself my daughter didn’t use her dolls for fashion play anyway: her Barbie “funeral,” for instance, was a tour de force of childhood imagination. I told myself I only got her “good” Barbies: ethnic Barbies, Wonder Woman Barbie, Cleopatra Barbie. Now that she’s 10 and long ago gave the dolls away (or “mummified” them and buried them in the back yard in a “time capsule”), I can’t say whether they’ll have any latent impact on her body image or self-perception. It would seem ludicrous, at any rate, to try to pinpoint the impact of one toy.

But now, according to a study published this week,  it turns out that playing with Barbie, even career Barbie, may indeed limit girls’ perception of their own future choices. Psychologists randomly assigned girls ages 4-7 to play with one of three dolls. Two were Barbies: a fashion Barbie (in a dress and high heels); and a “career” Barbie with a doctor’s coat and stethoscope. (NOTE: I just pulled these images from the web: I don’t know which actual Barbies they used.) 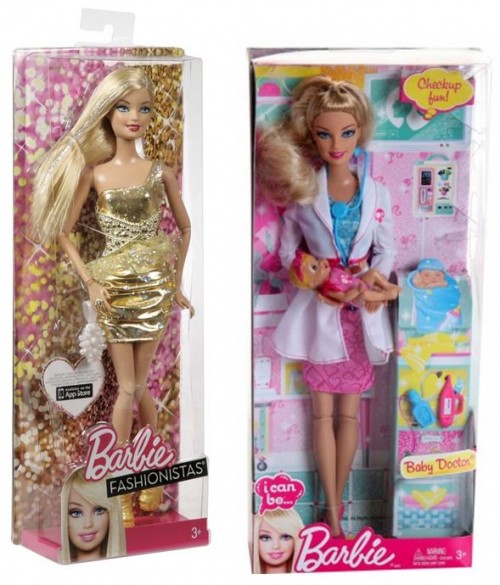 The third, “control” doll was a Mrs. Potato Head, who,  although she comes with fashion accessories such as a purse and shoes, doesn’t have Barbie’s sexualized (and totally unrealistic) curves.

So, after just a few minutes of play, the girls were asked if they could do any of 10 occupations when they grew up. They were also asked if boys could do those jobs. Half of the careers, according to the authors, were male-dominated and half were female dominated. The results:

More to the point:

There was no difference in results between girls who played with a Barbie wearing a dress and the career-focused, doctor version of the doll.

Obviously, the study is not definitive. Obviously, one doll isn’t going to make the critical difference in a young woman’s life blah blah blah. Still, it’s interesting that it doesn’t matter whether the girls played with fashion Barbie or doctor Barbie, the doll had the same effect and in only a few minutes.

That reminded me of a study in which college women enrolled in an advanced calculus class were asked to watch a series of four, 30-second TV commercials. The first group watched four netural ads. The second group watched two neutral ads and two depicting stereotypes about women  (a girl enraptured by acne medicine; a woman drooling over a brownie mix). Afterward they completed a survey and—bing!—the group who’d seen the stereo- typed ads expressed less interest in math- and science-related careers than classmates who had watched only the neutral ones. Let me repeat: the effect was demonstrable after watching two ads.

And guess who performed better on a math test, coeds who took it after being asked to try on a bathing suit or those who had been asked to try on a sweater? (Hint: the latter group; interestingly, male students showed no such disparity.)

Now think about the culture girls are exposed to over and over and over and over and over, whether in toys or movies or tv or music videos, in which regardless of what else you are—smart, athletic, kind, even feminist, even old—you must be “hot.” Perhaps, then, the issue is not “well, one doll can’t have that much of an impact,” so much as “if playing with one doll for a few minutes has that much impact what is the effect of the tsunami of sexualization that girls confront every day, year after year?”

Peggy Orenstein is the author of four books, including The New York Times best-seller Cinderella Ate My Daughter: Dispatches from the Front Lines of the New Girlie-Girl Culture.  You can follow her at her blog, where this post originally appeared, on facebook, and on twitter.

Sociology is harder work than this. I ultimately conclude focusing on dolls, TV commercials and the like is trivial stuff in comparison to the real social grist in life--years spent engaging daily with friends, family, other significant adults, teachers and authority figures.

What takes many incredible women with tremendous potential out of the mainstream workforce and leadership, in my opinion, is the fact that they have the choice whether to work for money or not. (Note I said "many". This is not an absolute.) I'm quite frustrated at the moment with my daughter, who is brilliant with a 6-figure income in the healthcare business at 25 years old, and keeps putting off grad school like she doesn't have a care in the world. "Why should I commit that kind of time now if I'm not sure I even want to be working the rest of my life?"

The converse of course is that most women find themselves in the position of having to work to support themselves and their families financially. Those women are likely to excel--Barbie or not.

I have only my personal experience to go by. I had a son, not a daughter but I did play with Barbie myself. I am inclined to agree with Ruben about the framing. I didn't have Career Barbie, as mine were seventies hippie like barbies. I had Barbie's friend Yellowstone Kelly, a redhead with a tan who liked outdoor pursuits and came with her own plastic tent. For me, the influence of Barbie was entirely about how I saw my own body. I believed that when I developed the body of a young adult woman I would look like Barbie. What a shock when that didn't happen. And because it didn't happen I thought of myself as somehow defective. What Barbie taught me, though subliminally, is that you can do anything but you should look hot while you do it.

That's an incredibly old fashioned word. It implies that students are male by default. Women and girls are the exception, thus, co-ed. (And yes I know that there were a few exceptions where girl schools were changed to be co-educational and then the boys were called coeds).

I'm surprised that anyone would use that word in a non-ironic way.

As a girl in college planning on being a doctor, I played with barbies my whole life. I was obsessed, and had fashionista babies galore with horses and houses and cars, the whole shebang. I took 7 AP courses in high school. Barbie has never affected me being a level headed women writhe big goals for life. This seemed to me like a feminist trying to assert her point of view through questionable ( in my opinion) studies.

My instinct is that this is not direct cause and effect. That is, the two commercials did not cause the students to do poorly in math and the short play with Barbie didn't cause the girls to assume they had fewer career options. Rather, the commercials and dolls were symbols that reminded the girls and young women of cultural messages they'd already assimilated. The commercials and images are filed in a place with all of the "women's roles" information in the mind and prime people to think in certain ways.

Ideas about what women can do are shaped by wider influences. I would have been surprised if playing with the dolls would have had any effect whatsoever. And the results in my opinion confirm that it did not: no matter which doll the girls played with, for only a few minutes, their ideas were unaffected. If the girls had not played with the dolls, they would have probably given the same answers.
So the conclusion is: playing with dolls for a couple of minutes does not affect girls' opinions on their gender's capabilities. The conclusion is not: playing with dolls for a couple of minutes had the effect of producing stereotype ideas. Experiments (especially poorly designed ones) are in my opinion the wrong tool to try and measure these things.

And the bikini experiment is just ludicrous, and I feel it is sexist: the idea that female bodies and intelligence are opposed things lies at its core.

[…] The Society Pages explains that girls who play with career Barbies have a limited perception of their futures. […]

Career Barbie and the Sexualization of Little Girls - Pacific Standard: The Science of Society — March 25, 2014

[…] between fun and meaningful is Sociological Images , a website with short articles like, “What Do Little Girls Really Learn from ‘Career ‘Barbies?” and “Questioning Media Portrayals of Female Drunkenness,” as well as pieces on the relationship […]

I think that it is very likely that the real cause of the dispairity is Stereotype Threat. Stereotype threat is the phenomenon whereby individuals who are in a stereotype-threatening environment perform in line with their stereotypes due to self-perception. In one study, African-American and white male atheletes were given a pen-and-paper atheletics test. When one group was told that it was a test of natural athletic ability, the African-American males performed better. When told that it was a test of stratigic ability, the white males performed better. This difference was significant and stereotype threat has been reproduced in other studies. It turns out, for example, that when women are told that they will perform as well as males on a math exam... they do!
Girls playing with barbie dolls are probably primed to exhibit their stereotyped role. The effect can be reversed so easily... all it takes is the belief that the role does not require the performance. I think this is very hopeful.

[…] to choose stripping. Truth is, we still live in a culture that objectifies women and teaches them from an early age that they are a body, a commodity, a consumer product. (Before I go into a full-blown rant, […]