As I wrote about the older-birth-mothers issue recently (first, and then), I didn’t comment on the photo illustrations people are using with the stories. But when an alert reader sent this one to me, from Katie Roiphe’s post in Slate, I couldn’t help it: 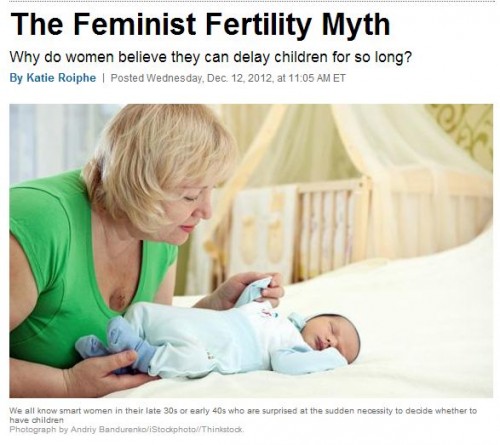 Something about that picture and “women in their late 30s or 40s” rubbed my correspondent the wrong way, or rather, led her to write, “Late 30s or early 40s?!?”

Since this was from a legit website that credits its stock agency, I was able to visit Thinkstock and search for the photo. Sure enough: 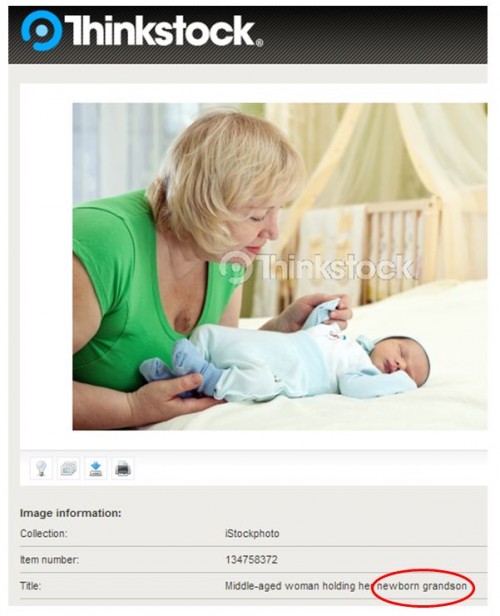 Of course, it’s not news, so the title “Middle-aged woman holding her newborn grandson” doesn’t make it a less true illustration of the older-mother phenomenon than one captioned “Desperate aging woman clings to feminist myth that it’s OK to delay childbearing.” But it gives you an idea of what the Slate editor was looking for in the stock photo.

I looked around a little, and found one other funny one. Another Slate essay,this one by Allison Benedikt, was reprinted in Canada’s National Post, and they laid it out like this: 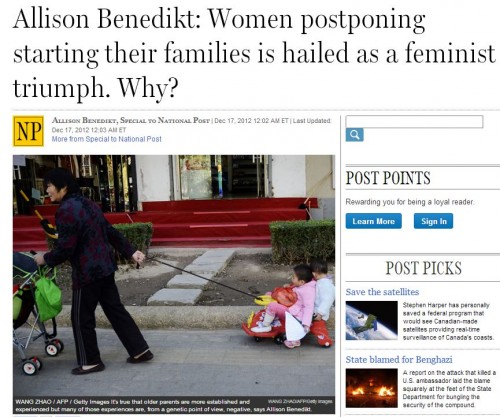 When I visited the Getty Images site, I discovered this picture was taken in China. Here’s how it’s presented: 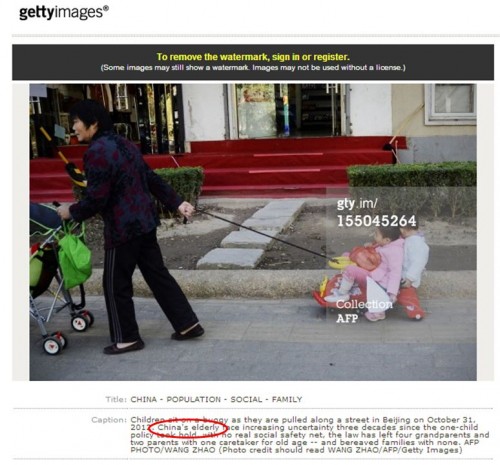 This one, which is a picture of real people, looks like it could be a grandmother, or maybe more likely a caretaker. Regardless, it’s sold as an illustration of a story about China’s elderly having too few grandchildren to take care of them, which is vaguely related to the content of the story, but that’s not what the Post’s caption points to:

It’s true that older parents are more established and experienced but many of those experiences are, from a genetic point of view, negative, says Allison Benedikt.

Anyway, there were others where the women looked pretty old for the story, but I couldn’t find them in the catalogs, so I stopped.

This is all relevant to one of my critiques of these stories, which is that they make it seem like having children at older ages has become more common than it was in the past. That’s true compared with 1980, but not 1960. The difference is it’s more likely to be their first child nowadays. So Benedikt is way off when she writes,

Remember how there was that one kid in your high school class whose parents were sooooo old that it was weird and creepy? That’s all of us now. Oops.

As I showed, 40-year-old women are less likely to have children now than they were when she was a kid. And when Roiphe writes of the “50-year-old mother in the kindergarten class [who] attracts a certain amount of catty interest and disapproval,” she should be aware that the disapproval — which I don’t doubt exists — is not about the increased frequency of older mothers, but about how people think about them.

*sigh* I don't understand all the fuss and the double standard.  Yes, it is true that for women having kids at older ages can have complications, but so can any birth. Yes, it's more likely at an older age, but there's so many other factors to consider. How well are you able to care for a child? How financial/emotional/etc stable are you? The only people who can make the decision is the couple along with advice from their doctor. Not to mention there's always adoption (even if it is complicated as hell, full of paperwork and expensive... enough for me to reconsider my options for when I do want children).

My parents were some of the youngest (barely 21 and 20 when I was born). And after they divorced my dad moved back in with his mom and dad. My grandma did all the "mom" things like take me school, doctor's appointments, sports, etc. My life was a lot better for having her there as a stabilizing element. I don't remember any negative remarks about my grandmother's age from back then... and I know a lot of them who only casually knew me thought she WAS my mom. Just my 2 cents there.

Also, the fact that my dad looks 10+ years younger than he really is, and the fact that I look a lot older due my height, made for some interesting comments growing up. (e.g. "Is that your boyfriend/husband?"). No matter what, some people will always talk and comment on anything that doesn't fit in their scope of "normal."

In related news, women who were 20 when the one-child policy was instituted have already turned 53 years old.

So what if an older woman has a baby?

Women live longer now than ever before.  As long as someone cares for the child, I don't see a problem.

I think this is a function somewhat of a separate issue—the erasure of women older than their 20s. People have come to have a bizarre understanding of what women's ages are. Think of all the on-screen pairings of characters that are supposed to be taken as being about the same age, but are played by actors with a decade between them. Or the actresses playing the mothers of actors the same age as them.

I remember a message board discussion about some news story, with a photo of a clearly very elderly woman, in her 80s if she was a day. At least one poster made a comment that assumed the woman to be about 60 years old. Basically, when women are "older" at younger ages, anything 30+ is imagined as way older than it actually is.

"You know that parent who seemed older than the other parents? People give them shit! I have a vested interest in perpetuating that shit, for some reason."

[...] that little old ladies are becoming little old mommies, but it turns out that a lot of the pictures are of GRANDMOTHERS and a grandchild. If they’ve got to make stuff up, I have to ask myself why the truth isn’t convincing [...]