The Job Market for New Sociologists

I was finishing up my dissertation in 2006.  The Great Recession was still two years away.  Nevertheless, there was talk about it being a tough job market for newly-minted sociologists and, like most everybody in my shoes, I was scared sh*tless about getting a job.

It’s obvious now that I was extremely lucky to get out of grad school when I did.  A few years later the American Sociological Association (ASA) would report that the number of jobs for new PhDs fell 40% from ’06/’07 to ’08/’09 (sociologists have a job “season” that straddles the New Year).

Neal Caren, a (gloriously employed) sociologist at UNC Chapel Hill, has been tracking the job market himself ever since.  His data, posted at Scatterplot, shows that the discipline has yet to recover from the Great Recession (if that’s the sole cause of the decline in job openings).  The yellow and green line represent the drop captured in the ASA report.  The purple line represents the devastating next year and the two blue-ish lines represent a slight recovery. 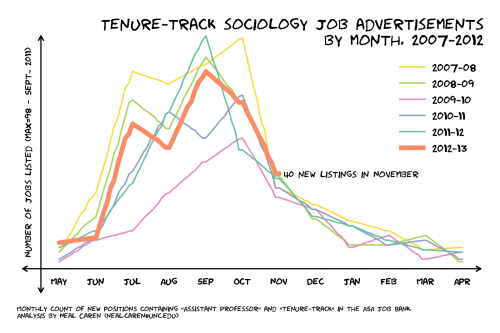 So, what advice do you have for a budding sociologist?

I also wonder how easily sociology graduates find employment (where their degree is directly useful) in the non-academic realm.  Caren's work is very interesting and important, but I wish there were a way he or others could track the trajectory of sociology students who do not wish to pursue academic careers.

"...[The] discipline has yet to recover from the Great Recession (if that’s the sole cause of the decline in job openings)."

It's blatantly apparent, in European universities at least, that for some time now anthropology and sociology departments are being underfunded, merged into other broader departments, not being allotted well-rounded curriculum options (I've heard professors complain about not being allowed to teach courses beyond basic Soc101-type courses) etc.  While I don't really know what the reasons for this is beyond financial reasons or perhaps dwindling interest by students, I really hope that the fields regain their ground.  These are really poor administrative decisions, in my opinion.

But I think sociologists also need to internally address why sociology departments are being undermined; they need to confront the very trajectory of their discipline.

I'll echo what's been said--these are solely academic jobs. I have an MA in sociology and have not worked in academia. I purposely did not get the PhD because I knew i wasn't going in that direction. For new sociologists, I recommend looking outside of academia--state and local government or non-profits, for example--and start thinking of skills you have acquired that are transferable to any workplace, like your quantitative skills.

The number of job advertisements look too high to me. I'd like to see all sociologists out of work (most already are, but one employed sociologist is one too many).

I know this all too well. I graduated in May from Rutgers and have a spreadsheet of over 40 jobs that I applied to with a total of two responses (both denials). So if anyone is hiring or needs an intern, I'm ready and willing!

It might be interesting to see how many jobs are being created relative to retirement. I know that the feeling in my part of the country is that R1 schools are tending to not replace retired professors at the same pace as they are leaving.

it might be fair to ask what kinds of jobs are being made. Again, the feel I hear from students on the market is that salaries are not what they used to be (even starting salaries) and rather than have a mix of teaching and research duties for faculty, departments are moving to hire more lecturers to take on teaching while they reserve tenure track positions for people who focus more on research. Not that lecturing is bad, it just doesn't seem to carry the job security that even a starting professor might get.

I got MA degree in Gender Studies in 2003 and employed in a local NGO. Currently work for Microsoft. Always feel lucky that I didn't have to fight for a job during the recession in 2008. To avoid that possibility, I'm now taking an MBA program.

Actually, having a good resume opens up new opportunities to be accepted into a high-paying job. You know, I have some experiences in writing resumes and that's why so many employers usually give feedback on my words. Therefore, I use this volunteer web developer to find a new occupation because there are a lot of different vacancies. This site is used by a lot of people all over the world and helps a lot in finding a job, so I guess you should definitely use it too if you want to try something new in your life. Just click on the link and use the benefits of this platform right now.