About a gazillion twitterers and three readers — Andi, Ria, and Jenna B. — have asked us to comment on the new Honda Fit She’s begin marketed in Japan. It’s a car. For ladies. It’s pink.  It reduces wrinkles. The apostrophe in the logo is a little heart. Etc.

My only response to this is: “how very la femme!”  Dodge La Femme that is.

Here is some of the advertising: 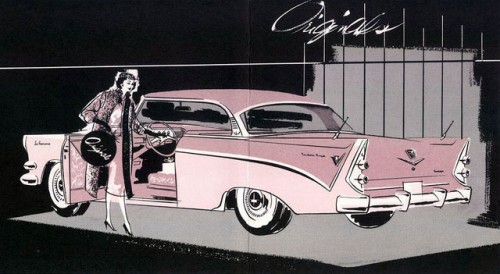 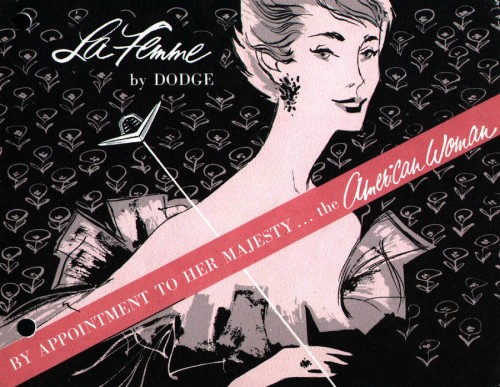 Pictures of a restored La Femme from a fan website show that the car was indeed two-tone pink, with pink rosebud patterned upholstery, and a matching umbrella, raincoat, a compact, and coin purse.

One of the reasons that the La Femme didn’t sell was because women were, frankly, offended.  Gender politics are different today, and they’re certainly different in Japan than they are in the U.S., so it’ll be fascinating to see how the She’s is received.

I'm now seriously regretting buying a fit. I mean, I could have a LADY-Fit! We don't know what my oh-so-manly-charcoal-grey Fit is doing to my delicate lady posterior! I mean, it might even help me drive *giggles*

"One of the reasons that the La Femme didn’t sell was because women were, frankly, offended."Can you cite the source for this?

You know, I have nothing but disdain for this entire strategy, but that is a gorgeous car.

I would totally sign up for the skin-friendly windows and air-conditioning/heating.  Why don't all cars have that?

I'm surprised that you led with the Honda Fit She's and not actually even give a mention of "Kawaii Culture" in Japan (which is where it's rolling out), and how it has become so pervasive within contemporary Japanese culture. While I find a lot of what "Kawaii Culture" is and does in Japan to be disturbing and (at least to me) a culturally justified avenue for continued sexism, I think that it's a mistake to not at least make a nod toward its existence, even if you don't provide a discussion on how it's being used (quite openly and uncontroversially) by one of Japan's leading car manufacturers (all of whom are worried about brand image) to sell products.

I do agree with you that it will be fascinating to know how the She's will be received in Japan, though.

Personally, I hate how things "for women" are colored pink because then everyone gets all upset about it and, dammit, pink is my favorite color and I would LOVE to have a pink car.  (I have a red Honda Fit right now and love it, so it's not like I'd be accepting a lesser product.)

In high school, many girls would obsess about the colour pink, like talking about it constantly would make them appear more feminine? I never understood this.
My favourite colour was green but I never talked about the colour obsessively or wear it day-in, day-out.

Oh, I was going to be all over this car because you said it "reduces wrinkles," and I hate when I get out of a car and my clothes are all wrinkly.  But then I read the article and realized that they meant wrinkles on your skin, which made me roll my eyes.  I have no idea how one would reduce wrinkles to clothes while sitting in cars, but this is what I want now that it's entered my mind!

More proof that women should not be allowed to drive.

I am most offended by the grammar. "She's"?