How Are Women Voting? And Why?

Nate Silver, the statistics guru behind FiveThirtyEight, is predicting that the gender gap in tomorrow’s election will be “near historic highs.”   According to Silver’s averaging of recent poll data, Obama has a 9-point lead among women, Romney has the same size lead among men. 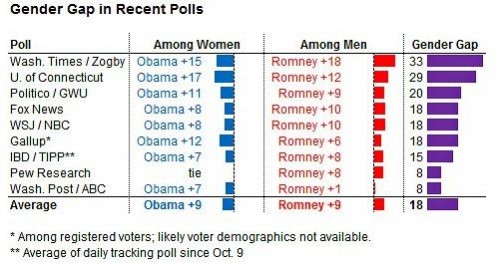 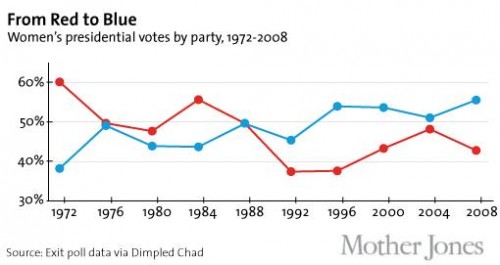 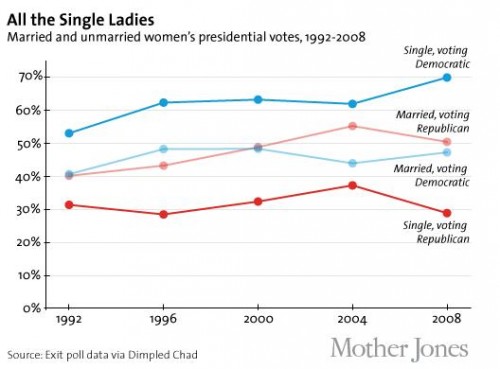 A concern for reproductive rights, especially in light of recent Republican comments, are likely a big driver of women’s retreat from the political right.  Their concerns very well may swing the election.  In a poll of swing states, Gallup found that abortion topped the list of concerns for women; it didn’t make men’s top five:

It will be interesting to see how long the Republicans will hold onto positions unfriendly to women’s reproductive options.

"A concern for reproductive rights [...] are likely a big driver of women’s retreat from the political right.  In a poll of swing states, Gallup found that abortion topped the list of concerns for women; it didn’t make men’s top five"

Abortion being the top issue for 39% of women in these states doesn't necessarily explain a retreat from the right - we don't know from the figures presented which way these women go on the issue. Surely it's possible that the 39% are predominantly pro-life/anti-choice?

It's clear from the "From Red to Blue" graph that the percentages don't all add up to 100% (or even close to 100%). It's interesting to note that in 1980, 1992, 1996, and 2000, have the most obvious "missing" percentages, which corresponded to when major third party candidates were able to garner significant vote shares.

If 80% of men think that abortion is the most important issue for women (perhaps based entirely on the recent news coverage granted to abortion and rape issues), then it doesn't actually require any women to agree with them to get that result...

"it will be interesting to see how long the Republicans will hold onto positions unfriendly to women's reproductive options"- this ignores the fact that planned parenthood only offers abortions and birth control. How often are women told that birth control is a class one carcinogen and increases the likelihood of STDs? As G.K. Chesterton wrote, right is right even if no one is doing it, and wrong is wrong even if everyone else is doing it

What?  Sandwiches are not the most important issue for men or women?

This is a bit of an old article, but I just wanted to point out that you cannot quite make blanket statements (women voted for  ____, youth voted for _____, etc.)
Here is an interesting article that breaks down the statistics, and shows that Obama only had a minor advantage in white women versus white men, the majority of his support came from black women vs black men.
http://www.huffingtonpost.com/david-c-wilson/the-elephant-in-the-exit_b_2094354.html
It would be very interesting if you could do a separate article on this, Lisa.

It's a shame that the money and energy are going to fight the issue of legality instead of into actually helping young people avoid the situation in the first place. An example of inefficiency in our democracy...