Mark Fischetti has posted an interactive graphic at Scientific American that lets you look at the prevalence of several behaviors or characteristics measured on the Centers for Disease Control and Prevention’s survey on risk factors. The graphic includes data on exercise, tobacco use, heavy drinking, binge drinking, and obesity. Commenters on the post suggested it’s unnecessarily snarky about obesity; that said, it provides a quick snapshot of several behaviors demographers often use to judge general trends in health. For each topic, a graph shows the state where it is highest and lowest; you can also select up to 3 additional states to compare.

For instance, the percent of people who took part in a physical activity in the last month is highest in Oregon and lowest in Mississippi; I added my home state of Oklahoma (dark blue) and current residence of Nevada (light blue) too: 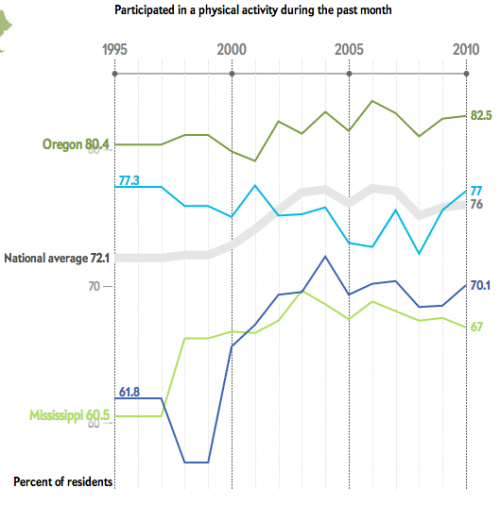 You also get a map for each topic that shows where it’s most or least common. Here’s the map for smoking: 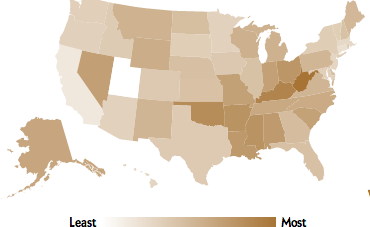 Sconnies, you may not be surprised to know that Wisconsin leads the nation in binge drinking: 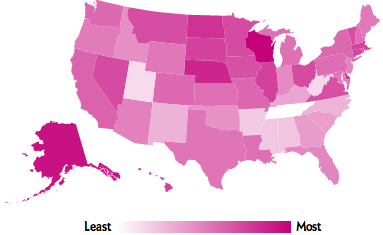 I can’t embed the graphic, so you’ll have to go to Scientific American’s post to play around and compare your own state.

This is actually kind of fun. I like that Colorado leads the States in least obese, but is about middle of the road for the others (excepting exercise). Oddly enough Oregon is more active but has a higher obesity rate. Which would contradict most of the explanations I've heard for Colorado's lack of obesity since it's almost always attributed to an "active lifestyle" rather than diet.

That is seriously strange phrasing: "Took part in a physical activity". Um, breathing? Sleeping? Blinking? All of those are physical activities. Why are they avoiding the term "exercise", "sport" or whatever it is exactly that they mean?

I'm sadly not at all surprised to know that Wisconsin leads the U.S. in binge drink. I am surprised you used what I've always felt was a somewhat dismissive and derogatory term, "Sconnies."  This is not really used outside of the context of UW-Madison (and in my experience at UW, used mostly by non-Wisconsin natives). We are Cheeseheads or Badgers but never Sconnies.

I went to UW-Madison, I am acutely aware that WI leads the US in binge drinking.

It sometimes scares me that these medications can cause serious health issues to my dog. Until I discovered the Dog pain relief. They made my dog feel so much better and he recovered instantly because of this.

Thank you for sharing, this good information, by the way, to anyone here looking for a supplement for slim body and smoother digestion please check this product called Bio X4, check their ingredients here. It is a powerful four way defensive strategy against unhealthy cravings, digestive issues, and more!