The Future of Student Loan Debt

Earlier this summer, Lisa posted about total student loan debt in the U.S., which has increased overall as more people go to college. “Student Lending’s Failing Grade,” a report from Moody’s Analytics  provides more information about student loan debt. Demand for student loans continues to increase as the number of high school graduates who go on to college rises. Over 40% now attend (blue line; the right axis shows percents): 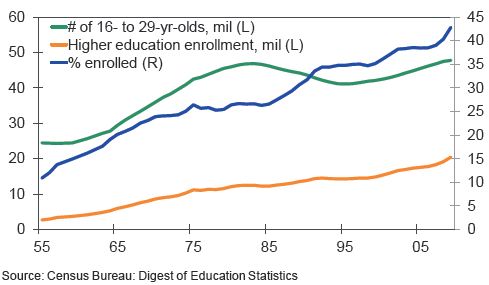 Enrollment at for-profit institutions such as University of Phoenix is still a small minority of all those going to college, but it’s growing rapidly: 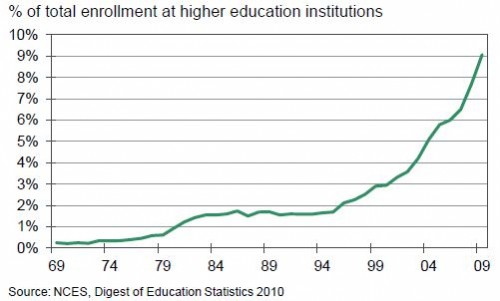 This is significant for student loan debt because students at for-profit (or proprietary) institutions have much higher default rates than students at private or public colleges: 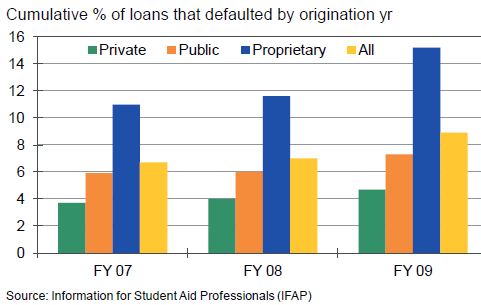 However, the report points out that default and delinquency rates on student loans are quite low compared to other forms of debt. This is partially due to the consequences of defaulting, but also because it’s easier to defer student loan repayment and thus avoid being labeled as “defaulting” than it is for most other loans.

Overall, the report argues that projections of future student loan debt are worrisome. Loans taken out more recently have higher default rates than in the past, and students may have unrealistic expectations of how much they will make after graduation, and so overestimate how much they’ll be able to pay in student loan debt each month. From my experience watching students, I would add that it’s not even that they overestimate how much they’ll be able to afford; many don’t have a clear sense of how much their monthly payment will be, especially since they take out loans on a semester-by-semester basis and may not really think about the cumulative debt they’re taking on. Many are then shocked to discover that their monthly bill isn’t the insignificant sum they’d assumed it would be.

This is to say nothing of draconian interest rates.  I have a friend for whom the interest on his law school loans is accruing at a higher monthly rate than his monthly payment.

Just like with the housing debt bubble, the education debt bubble is being driven by federal policy. The easier and more available you make loans, the more debt you create. If you subsidize debt you get MORE of it, not less.  The entire federal "plan" to decrease the cost of college by loaning more money is an abject failure.

[...] selected for extreme gullibility by the fact that they registered at a for-profit college).  The for-profit colleges are a growing part of college enrollment, though, as public colleges get slashed by legislators (thanks in part to lobbyists for for-profit [...]

A great companion to these graphics is Eric Best's special feature "Are Some Universities Too Big To Fail?" here on The Society Pages: http://thesocietypages.org/specials/phoenix-as-canary/

Student loans are in an awful situation, currently. People are taking them, but we heard a lot of bad news from people that wanted just to cancel them. And someone can use it because it is the easiest way to solve all your problem with financing university and forgetting about money that you need to pay to be well-educated to have well paid job that can help you to be in a good spot in society. In life also there are even better way to pay for your university is to use saving account, and it is really not easy process, but there are a dozen of different websites on internet where you can read articles on these theme, for example at Fit My Money there is an article that helped me to build my account, and now I can truly buy a lot of different things and have decent amounted for everything.

Student loans are currently in a bad state. People are taking them, but we've had a lot of negative feedback from those who wished to cancel them. In life, there are even better ways to pay for your university, and it is not an easy process, but there are a dozen of different websites on the internet where you can read articles on these topics, for example, at Easy Qualify Money there is an article that helped me build my account, and now I can truly buy a lot of different things and have a decent amount for everything.