Last month the president of fast-food chain Chik-fil-A publicly stated that the company opposed same-sex marriage. The restaurant then became a flash point in the struggle around who has the right to get married. Supporters of marriage equality called for boycotts, but opponents of same-sex marriage participated in Chik-fil-A, organized by Republican former governor of Arkansas (and Fox News commentator) Mike Huckabee. Huge numbers of people turned out to patronize the store last Wednesday, leading to enormous lines and long waits at some locations, and intense media coverage of the event.

So Chik-fil-A became clearly associated with the anti-same-sex marriage camp, and more generally with the conservative movement. But what about other restaurants?

Reader Peter N., of Pitzer College, sent in an image posted by the Los Angeles Times showing the politics and political engagement of patrons of a number of restaurants, as well as Whole Foods. A market research firm’s survey asked respondents if they had gone to any of these restaurants in the past 30 days (7 for Whole Foods), political leanings, and likelihood of voting. In this graph, the larger the bubble, the more respondents said they had gone to the restaurant. Those left of the center line had a disproportionate number of Democratic customers, while those to the right attracted Republicans. The higher the bubble on the graph, the more likely its customers were to vote: 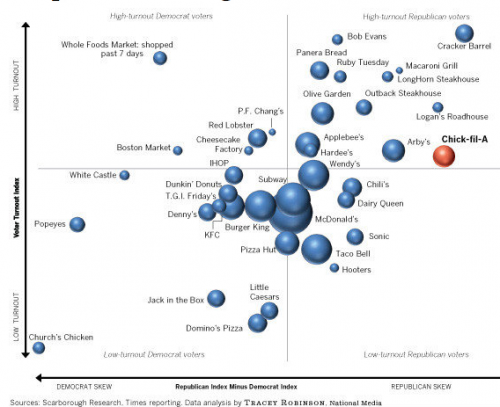 Aside from the political patterns, notice the differences in likelihood of voting. Generally, customers at sit-down restaurants like P.F. Chang’s and Macaroni Grill were more likely to vote than those at fast-food places, though there are a few exceptions (Denny’s, Hooters). This probably reflects class differences in voting: the restaurants in the upper half of the graph are generally more expensive than the fast-food places or chains like Denny’s, and they require more leisure time for a meal compared to getting a pre-made, or quickly-made, combo at the drive-through. Those with the money and time to spend on such restaurants are the same groups who are more likely to vote in general.

I have a feeling this is an artifact more of where the restaurants are located.  For example, I enjoy Sonic but there simply aren't any near me.  They are primarily located in rural areas, and I live in a large city.  As a result, Sonic skews more conservative although probably many liberals would enjoy their food.

I did find the blank area in the upper left-hand corner of the grid quite interesting; I suppose it is because more upper-income liberals are avoiding chain restaurants in favor of local and/or more expensive places.

So, conservatives and likely voters are afraid to eat at Church's and Popeye's. Seems to me that there's a whole 'nother sociological dimension to this graph.

Class (or, at least, disposable income) does appear to be the key variable in the vertical axis of the graph. But the horizontal axis, on the other hand, probably tells us more about geography and race than about class.

The outliers on the far left end, Popeye's and Church's, are not all that different from Chick Fil A in their menus (fried chicken, fries, biscuits), but are concentrated heavily in black neighborhoods and diverse, working-class urban areas. Both strongholds of Democrat voting.

Chick-Fil-A and Cracker Barrel, on the other hand, are both based in the Deep South, with huge numbers of locations in the cluster of Southeastern red states. Their locations in other regions are few and far between, and of those, most are not in dense urban areas. Oklahoma-based Sonic, which also skews to the right, is found primarily in heavily Republican OK and Texas, whereas Jack-in-the-Box appears mostly on the West Coast. Here's a nifty map of each chain's market saturation - http://www.good.is/post/map-of-every-fast-food-hamburger-in-america/

This doesn't tell us a whole lot about the relationship between politics and consumer choices (nowhere in the country do people have all of the listed outlets to choose from; the overwhelmingly dominant factor in restaurant choice is always proximity). What it does tell us, though, is which risks a nationwide chain can afford to take in expressing a sociopolitical position. Chick-Fil-A can very clearly afford to alienate pro-equality and/or left-leaning consumers, and Whole Foods can handily alienate the anti-gay and/or Republicans. But flip it the other way around, and imagine a stand being taken against the current of the base, and we'd see a much bigger risk for these companies - one that might be worthy of the admiration that equality opponents in the blogosphere have undeservedly bestowed on Chick-Fil-A COO  Dan Cathy.

This would be more interesting if there were some clues about the political leanings of the restaurant owners.  I'm a high-voting Democrat and I avoid Whole Foods strenuously because the founder/chairman is an anti-union libertarian climate change denier who vocally opposed health care reform.  It's very easy for people like me to "boycott" Chik-fil-A (I don't think I've ever been in one) but a lot harder to avoid companies that are actively marketing to me.  And just try telling my friends to give up Whole Foods because of politics!

I'm confused as to why Whole Foods is even included with casual and fast food chains.  That, honestly, strikes me as very suspicious.  Why not include Trader Joe's, Jewel/Albertson's, Fry's, or Safeway/Dominick's as well?  Without any explanation or context, I am wondering if that wasn't included as a "take that" from the supposedly much more educated, wealthy, upper middle class, predominantly white liberals towards people who eat at fast food places.

Another note on the geography bit: the restaurants that are common around the country and don't tend to skew in one direction or another as far as income levels go (Subway, McDonald's, Burger King, Wendy's, IHOP) as opposed to ones that are highly specific to one area (like Chick Fil A) or tend to be in neighborhoods with specific income levels (PF Chang's) all settle in the middle of the political spectrum, and average just below the middle of the voter turnout spectrum.

I agree with some other posters that this is also a reflection of geography.  Chik-fil-a's are prolific in the south and midwest, but there aren't many to be found in northern states -especially not in northern cities.

Cracker Barrel just makes me laugh, I always think of it as the place for old, white people. Republican? You don't say...

[...] this graphic from Sociological Images generated in the wake of the Chick-fil-A [...]

as most of the restaurants decide to take survey. But food courts like mcdvoice. everyone need to do is you need to follow our article on mcdvoice survey. you can Access official website, every participants can start taking on mcdvoice survey and submit your feedback, you will win free burgers and french fries cards. But if you complete the survey, the participants have no issues in doing so.