Air pollution is what economists call an “externality.”  It is not an intrinsic part of the economic bargaining between producers and consumers.  The usual market forces — buyers and sellers pursuing their own individual interests — won’t help.  The market may bring us more goods at lower prices, for example, but it can harm the air that everyone, in or out of that market, has to breathe. To create or protect a public good, the free market has to be a little less free.  That’s where government steps in.  Or not.

Case in point: My son and his girlfriend arrived in Beijing ten days ago.  The got-here-safely e-mail ended with this:

…was blown away by the pollution! I know people talk about it all the time, but it really is crazy.

And it is.  Here’s a photo I grabbed from the Internet:

At about the same time, I came upon a this link to photos of my home town Pittsburgh in 1940.  Here are two of them: 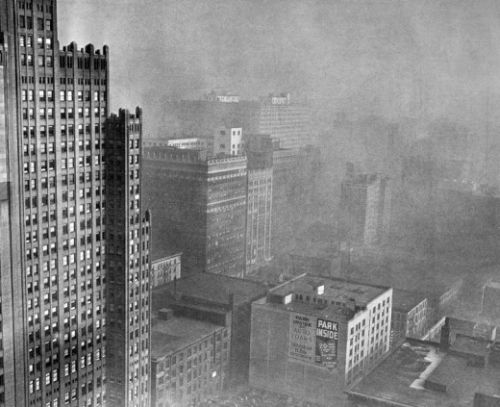 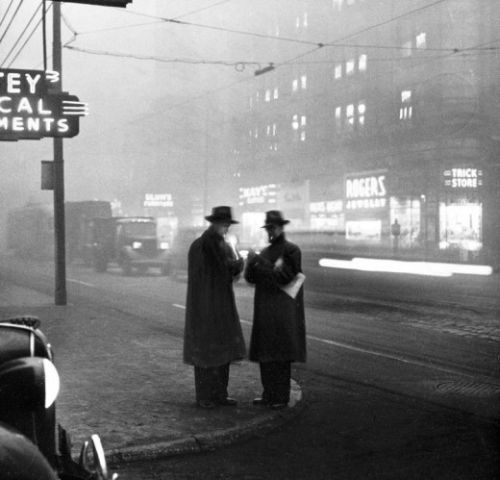 Today in downtown Pittsburgh, the streetcars and overhead trolleys are gone.  So are the fedoras.  And so is the smoke.

The smoke was caused by the burning of coal, and while the steel mills accounted for some of the smoke, much of the it came from coal-burning furnaces in Pittsburghers’ houses.  If the city was to have cleaner air, the government would have to force people change the way they heated their homes.  And that is exactly what the law did. To create a public good — clean air — the law required individuals to purchase something — either non-polluting fuel (oil, gas, or smokeless coal) or smokeless equipment.*

Initially, not everyone favored smoke control, but as Pittsburgh became cleaner and lost its “Smoky City” label, approval of the regulations increased, and there was a fairly rapid transition to gas heating.  By the 1950s, nobody longed for the unregulated air of 1940.  Smoke control was a great success.**  Of course, it may have helped that Pittsburgh did not have a major opposition party railing against this government takeover of home heating or claiming that smoke control was a jobs-killing assault on freedom.

* Enforcement focused not on individuals but distributors.  Truckers were forbidden from delivering the wrong kind of coal.

My father, who went to Carnegie Mellon (in Pittsburgh) in the early seventies, said that by that time you still couldn't keep any silver things in the house, because they would tarnish within the week.

Not to quibble too much here (mostly because I agree with the overall sentiment), but air quality in Pgh is still one of the top ten worst in the country. I think it is important to point out that, although much of the visible pollution is gone, there is still a long way to go.

When we arrived in Beijing in the summer of 2007, we would open up the windows of our apartment overnight to cool off. We'd then need to mop the floor in the morning because it would be covered with soot. It was routinely the case that we couldn't see beyond a couple of city blocks from our high-rise apartment. My wife developed asthma for the first time in her life.

Then, the government decided to do a trial run of a temporary air cleanup program in preparation for the Olympics, timed to coincide with a meeting of  African Union delegates hosted by the PRC. They aggressively seeded the clouds around the city, shut down all factories and 50% of the power plants in Hebei, and mandated that vehicles with odd- and even-numbered license plates only drive on their respective days of the week.

It rained torrentially for three days and flooded our courtyard. Then we had a week of the most amazing, gorgeous weather I had ever seen in any Chinese city. We could see distant hills from our apartment window, and I could finally smell something other than car exhaust. The temperature dropped by 10 degrees F and every square inch of green space was occupied by a Chinese person enjoying the weather.

Then the delegates left, the factories spun back up, and we all went back to getting lung cancer.

Which one? City? State? I doubt the federal government of limited powers did.

And yet we wonder why the economies of the "rust belt" collapsed. We outsourced the pollution to places that care more about jobs, any jobs, than clean air and union wages.

The interesting thing is that there are free market solutions to externalities and public goods. But it turns out that people in general aren't quite as willing to pay for air quality when they can see the money leaving their pockets.

All that said, I'm hugely in favor of local controls on pollution that make producers pay for the real costs, and make those costs visible to consumers. A tax on pollutants is direct and obvious. A mandate on outputs may sometimes be effective, but it is unlikely to be as efficient.

Is Pduggie saying that s/he doubts the federal government had anything to do with it? Ever hear of the Clean Air Act?

Did Pittsburgh compel people to purchase clean fuel or smokeless heaters, or did they forbid people to pollute?

Damn, those pictures of Pittsburgh in the 40's are awesomely Noir!

Those people who claim that pollution regulations kill jobs seem to be right.