The Hunger Games should serve as a wake-up call to Hollywood that women action-hero movies can be successful if the protagonist is portrayed as a complex subject — instead of a hyper-sexualized fighting fuck toy (FFT).

In its first weekend, The Hunger Games grossed $155 million, making it the third highest opener of all time (behind the last Harry Potter film and The Dark Knight), despite a marketing budget half the size of a typical big-studio, big-budget film. It seized the records for top opener released outside of July, top non-sequel opener and top opener with a woman protagonist. By the second weekend, The Hunger Games had made $251 million in the U.S. — the fastest non-sequel to break the quarter-billion-dollar mark.

While the movie arguably plays up the romance angle more than the books, The Hunger Games is still squarely an action thriller, set in a dystopic future world where teens fight to the death in a reality show.

Its success is largely based on the wide appeal of its teenage hero, Katniss Everdeen, who makes it through the movie without being sexually objectified once — a rarity in action films. Katniss is a believable, reluctant hero.

Katniss succeeds with audiences where other women heroes have failed because she isn’t an FFT. Fighting fuck toys are hyper-sexualized women protagonists who are able to “kick ass” (and kill) with the best of them — and look good doing it. The FFT appears empowered, but her very existence serves the pleasure of the heterosexual male viewer. In short, the FFT takes female agency and appropriates it for the male gaze.

From an ethical standpoint, Hollywood executives should be concerned about the damage girls and women sustain growing up in a society with ubiquitous images of sex objects. But it appears they are not. From a business standpoint, then, they should be concerned about the money they could be making with better women action heroes. But so far, they seem pretty clueless.

Hollywood rolls out FFTs every few years that generally don’t perform well at the box office (think Elektra, Catwoman, Sucker Punch), leading executives to wrongly conclude that women action leads aren’t bankable. In fact, the problem isn’t their sex; the problem is their portrayal as sex objects. Objects aren’t convincing protagonists. Subjects act while objects are acted upon, so reducing a woman action hero to an object, even sporadically, diminishes her ability to believably carry a storyline. The FFT might have an enviable swagger and do cool stunts, but she’s ultimately a bit of a joke.

For a breakdown of why FFTS lack believability and appeal, check out the Escher Girls tumbler, a site that critiques the ridiculous physical contortions of FFTs that allow them to be both sex objects and action heroines.  Contortions like this: 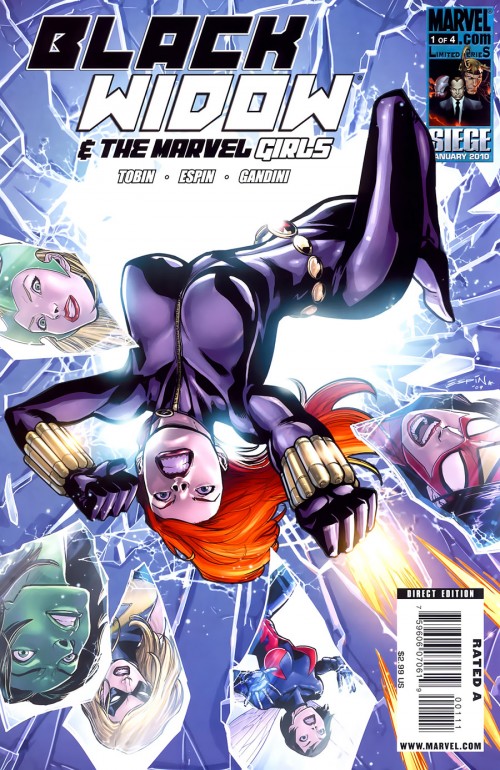 As Mark Hughes from Forbes.com points out, movie studios artificially limit their profits when they target only male audiences (by, for instance, by portraying women only as FFTs). With the phenomenal success of The Hunger Games, Hollywood can no longer deny the bankability of believable women action leads. Forty percent of the audience for The Hunger Games is male, proving that a kick-ass woman lead who isn’t reduced to a sex object can appeal to all genders. That should put dollar signs in executives’ eyes.

Hollywood is now on a quest to find the next Katniss Everdeen. Whoever she is, the question will be: Do executives know better than to turn her into a fighting fuck toy?

Good, good point on the assumptions that execs make about which demographics "sell" better.  Sure, sex sells.  We like to see attractive people on the screen.  But there is a point where it goes from "hey, cool, attractive people fighting" to "boring," "contrived," "uncomfortable," and sometimes even "Uncanny Valley" (at least in the case of hyper-stylized pieces like the comic books).  Sure, a few basement dwelling men who have never really interacted with women who weren't related to them have some wank fodder, but that's a smaller demographic than people making movies seem to expect.  When I see a woman fighting in 4-inch heels and skintight leather without smudging her makeup or her hair frizzing up, sure, I might think "cool."  I probably also think "how the fuck is that even possible."  Send any real-world woman to spend an hour in a crowded bar wearing 4 inch heels and a leather skirt, and by the end of the experiment, her hair and makeup will have started to shift, she'll be sweaty, and her feet will hurt, even if she spent most of the time sitting down or leaning against the bar.  And most men, at least the men I know, know this to an extent.  I can't tell you how many times my male roommate has asked "can you even do that in heels?  Isn't she, like, warm in that outfit?  And the cutouts reveal all of her weak spots, she's totally unprotected" when watching cheesy action movies.

Interestingly, in the Hunger Games books (I have yet to see the movie, so these scenes may be absent), Katniss worries about herself and Peeta basically being paraded as Fighting Fuck Toys, and is upset when some of the other tributes are presented as such.  The character of Cinna is implied to be explicitly avoiding this trope after past fashion designers had embraced it for District 12.

Great post, though I think part of the reason Katniss is never sexualized is because she's 16.  I'd love to see an adult female action figure in a Hollywood blockbuster get the non-hyper-sexualized treatment.  Still, this is a step in the right direction.

It's a very positive move, and as mentioned by Tusconian, it's actually a theme in the book. It's mostly glossed over in the movie, but the books deal with appearance quite a bit and some tributes (other kids in the movie) are hyper-sexualized because it earns them more sponsors (fans). There is a very big moment in the third book that deals with this, and it will be interesting to see how they decide to handle this.

Since you posted Black Widow as an FFT example, it's also interesting to note that while her role in Iron Man 2 movie was laughable, they brought on Joss Wedon (famed for Buffy the Vampire Slayer) to help write Avengers. Rumor is that it is mostly to help write Black Widow as something a little more balanced.  Knowing that character that's going to be pretty difficult (I mean, her name IS Black Widow..), but perhaps it's another sign of a positive move in Hollywood? After seeing Hunger Games I'm starting to raise my expectations a little.

I read the first book of the series and saw the movie, and I like the presentation of Katniss in both. I even recently had a guest write a post about the movies for my blog. Katniss is a strong female role model, and should be treated with respect. Some (as my guest poster argued against) have posited that Hunger Games is the next Twilight because of a female character and romantic subplot. That doesn't seem to be the case, however.

Katniss is strong, independent, and well-rounded. She mistakes, but not because she is "ditzy" or because of her femininity. It is because she is human, just like every good character.

Since Katniss derives from YA lit, comparing her to the FFTs is a bit apples-to-oranges. A better comparison is with the girl power action heroes like Buffy and Charmed--popular with teens, make and female alike, much like The Hunger Games.

See http://rebeccahains.wordpress.com/2012/04/09/katniss-everdeen-the-first-post-girl-power-hero/ for more on Katniss as the first post-girl power hero.

Sex objects aren't the problem its just the movies suck especially the ones he mention ed ... You idiots make everything an issue...

Hollywood also seems to have a difficult time not sexualizing already good female characters. Look at Lisbeth Salander from Girl With The Dragon Tattoo (American remake), or even Hermione from Harry Potter. Both are excellent characters, but both are changed so they can fit the more typical FFT stereotype. Although Lisbeth's an awesome badass, the movie can't help but show her tits and ass a ton of times to get across 'not only is she cool, she's SEXY', and Hermione's personality (witty know-it-all) is pretty much scrapped later in the movies, and they just focus on how pretty she is. Kinda reinforces an earlier post about how our culture says "girls can be anything, as long as they look hot while doing it".

I think I would be as thrilled as Ms Heldman to see more strong and complex female protagonists in any genre. But I don't think her conjectures about the film industry or her analysis of the box office are nearly as insightful, well-informed, or well-substantiated as her persuasive comments on gender politics.

The underlying issue from which the others stem is that the wide-release schedule has an ever-declining amount of room for films that are not already proven commodities. "The Hunger Games" was a very obvious choice for a new studio franchise, as its source material is enormously popular with its most profitable demographic. The question here is, could the movie have possibly become such a blockbuster had it been created directly for the screen? Looking at the Top 10 films from last year, every single one of them was either a sequel or based on pre-existing material. So in order for the film industry to bother with a new property in the action genre, that property will first have to have success in another form -books, video games, theme-park rides, it hardly matters anymore.

As a counterpoint, consider movies like "Hanna" and "The Professional." Like "Hunger Games," both were acclaimed films featuring a non-sexualized adolescent female action hero, but neither was based on an existing franchise. They were both box-office failures ($40 million and $19m, respectively). Both examples caution against the idea that an original female action lead - or, really, anything original at all - is enough of a feature to draw an audience. Familiarity, sadly, has far more box-office value.

As for the notion that a 40% male audience is evidence of "appeal to all genders," I'm afraid to say, this is actually a rather low number  (the last Twilight film, in comparison, played to about 35% males, and is widely regarded as a bit of a girls-only territory). What both franchises prove is that a large audience of teenage girls can be extremely profitable regardless of whether their male peers take much interest. And that can turn out to be a good thing.

[...] Dr. Caroline Heldman writes for Sociological Images that Hollywood execs are missing out on revenues because Hollywood continues to depict female [...]

[...] about beauty labor and public performances, this one about public surveillance, and this one about kick ass female characters. Like I said, I read a lot of [...]

[...] many issues are swirling around the “Hunger Games” movie, but this article’s viewpoint stood out to me. The FFT trend is one that infuriates me to no end, and Caroline Heldman has been [...]

The movie, "Colombiana" sprang to mind when I read this article...

Haywire was another awesome movie, in my opinion, because of this, too; Gina Carano's character wasn't objectified. Instead, she was smart, determined, strong, and utterly capable. She was a great protagonist, even if it wasn't the greatest movie ever made, and I wish Hollywood would give us more like her!

[…] Images always offers intelligent commentary, and in this article, argues that: “The Hunger Games should serve as a wake-up call to Hollywood that women […]