Beer: Part of a “Lovely” Workday

Here we have another great vintage ad (1962) that upsets the idea that today’s norms are trans-historical.  First, the idea of having a “pint about midday” would be considered inappropriate by many U.S. employers (though, as several commenters have pointed out, not necessarily elsewhere).  Second, the large print — “Beer, It’s Lovely!” — sounds unmasculine today, even though these grizzled sea-farers likely would have seemed perfectly masculine enough at the time. 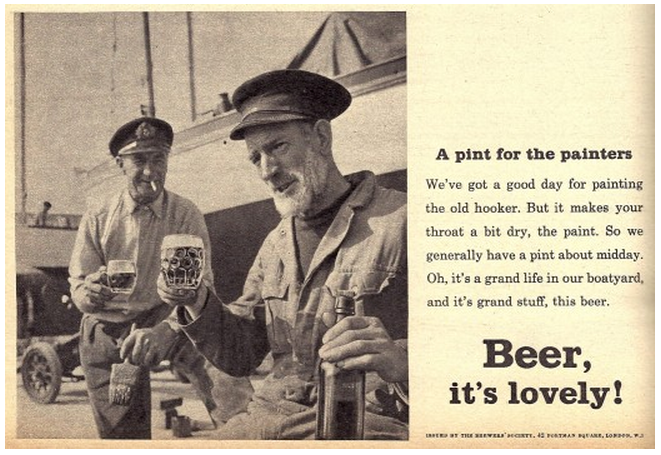 From the RAF Flying Review, found at Retronaut.

Not to mention they're "painting the old hooker."  No idea what that even means... :)

Well, it's British, so there's a whole other set of variables about what words are used.

Not the most masculine mugs I ever saw.

It is completely normal to drink beer at lunch at German car manufacturers like Audi.

I'm trying to figure out how those glasses are holding a full pint of beer.  Looks closer to 10 ounces.  Or maybe to have up to two? Either way, that's not a lot of alcohol and wouldn't cause appreciable impairment in more adults as far as I know.  Two beers over a 30min lunch brings a 200lb male's BAC to only around 0.03, well under the legal limit.  Of course, moderation is the key.

The bottom says "Issued by the Brewers' Society," so it's just for beer in general, not even a specific one!

"
upsets the idea that today’s norms are trans-historical"

do a large number of people really think that? They may think today's norms are awesome, that it would be a shame to change them, but I think a lot of folks know things were different in 45BC, 1066AD or what have you. Most of the 20th century was all about how awesome new norms were coming because material conditions were changing so much (air travel, etc)

Having lived in the UK... a pint at midday is surprisingly normal, actually! I was surprised that my lack of lunchtime drinking with my coworkers made me look like a snob. Cultural norms, eh?

I'm British, and I've heard plenty of men using the word 'lovely', including men in their 20s! It is more of a feminine word now, but not completely. Also, as other commenters have said, a pint at lunchtime is not at all unusual in British workplaces. Just because it's a contemporary norm in American society doesn't mean that it automatically becomes the norm for every Western, English-speaking country...

There's absolutely nothing "unmasculine" about describing a beer as lovely, and even here, in the barren provinces of Canada, do we enjoy a level of civility that allows to enjoy a pint at lunch.

As others have said, having an alcoholic drink at lunchtime is not strange in many places in the world, even English-speaking ones! Here in Australia my colleagues and I probably only drink alcohol at lunchtime once or twice a week, not all the time, but all the university cafes sell it and I've never seen anyone bat an eyelid when a colleague takes a bottle of beer instead of coke or orders a glass of wine rather than juice with their lunch. A visiting American said she was amazed how much drinking was integrated into the university culture, and how all the food places sold alcohol, but when we thought about it more, we figured out the reason it probably ISN'T that way in the USA is that your drinking age is so much higher - many undergrads wouldn't be of legal drinking age yet in the USA, so it makes sense that campus eateries wouldn't bother selling it (plus they'd have to start asking for ID or something, I guess, so that's a hassle).

We also keep beer and wine in the dept fridge, and often crack open a bottle if we are all sitting around in the dept tea-room at lunchtime, or at afternoon tea. (The bottle of whiskey for late night grading emergencies is another matter, of course - that's kept under lock and key!)

In France the idea of having a drink as part of your working day is so usual that the police union protested when the government tried (last year!) to legislate to forbid riot police from drinking during the working day: http://www.guardian.co.uk/world/2011/apr/21/french-riot-police-acohol-ban

This looks fake, and Retronaut doesn't provide any citations, nor did my googling. Anything to back this up would be nice.