The Declining Significance of “Class”

Class seems to have disappeared from public discourse, except for the Republicans’ insistence that to mention inequality at all is to engage in “class warfare.” The only class we hear about, whether from politicians or the media, is the middle class.  Here, for example, are the results of  a Lexis-Nexis search of news transcripts in the previous month. 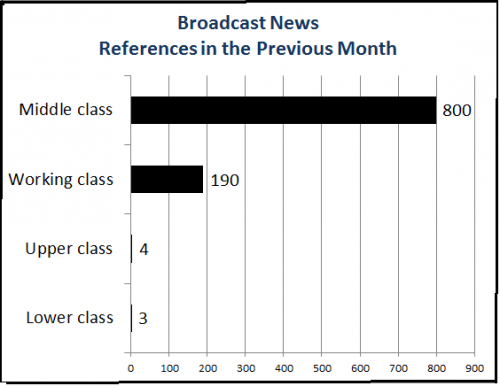 On TV news, the upper and lower class do not exist.

So how do we talk about those at the top and bottom of society?  The discussion of inequality is now all about income.   While “lower class” and “upper class” had only three and four mentions, respectively, in this same period, income terms (high, upper, low, lower) numbered over 300.

For some historical perspective, I looked at Google Ngrams for the frequency of class terms in books.

The pattern for upper class is similar — a large decline in class talk, a much smaller decrease in income talk — though class references still outnumber income references.

From the media, you get the impression that except for a handful of people at the top and the bottom, there really is only one class in America — the middle class — and that the working class has faded into history.  Yet the GSS subjective social class item (“Which class would you say you belong in?”) gets the same results as it did in 1972: a roughly equal split between “middle” and “working” that accounts for 9 out of 10 Americans. 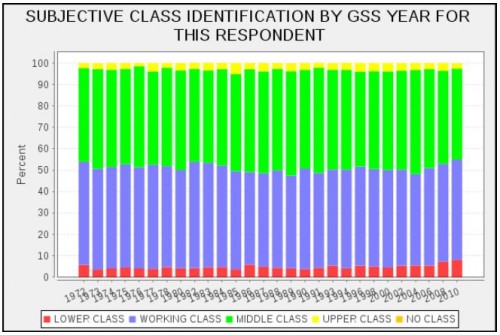 Taking a quick look at British English n-grams for comparison, it looks like "working class" was talked about A LOT during the Thatcher years. However, it, too has diminished since then (although mentions of other forms of "class" have remained roughly the same):
http://books.google.com/ngrams/graph?content=social+class%2Cworking+class%2Clower+class%2Cmiddle+class%2Cupper+class&year_start=1900&year_end=2000&corpus=6&smoothing=3

Also, looking at comparisons for the second n-gram graph, British English saw a significant rise in mentions of 'upper class' during the WW2 years, but didn't see the rise in the term that we see in the US leading up to 1970. Too, the use of "high income" was on the rise from 1990-2000:
http://books.google.com/ngrams/graph?content=upper+income%2C+high+income%2C+upper+class&year_start=1900&year_end=2000&corpus=6&smoothing=3

My impression of the last 25 years or so is that Working Class Americans consider themselves to be Middle Class. Why they should do that I'm not sure except that in the U.S. you do not need to be an entrepreneur of any sort to be considered Middle Class. In my youth a professional was someone who set their own hours and told their customers or patients what they should pay for professional services. Now, even teachers want to be called "professionals."

My impression of the last 25 years or so is that Working Class Americans consider themselves to be Middle Class. Why they should do that I'm not sure except that in the U.S. you do not need to be an entrepreneur of any sort to be considered Middle Class. In my youth a professional was someone who set their own hours and told their customers or patients what they should pay for professional services. Now, even teachers want to be called "professionals."

[...] of the day: Media class unconsciousness? Posted on 2012 January 27 | Leave a comment Via Sociological Images, a chart from Montclair State sociologist Jay Livingston of Lexis/Nexis broadcast media uses of the [...]

One reason might be that we generalize from our reference groups (and we are typically towards the middle of the hierarchy in those). Evans,
M.D.R. and Jonathan Kelley. 2004. “Subjective Social Location: Data from 21
Nations.”  International Journal of
Public Opinion Research 16(1):3-38.

In my experience, the "lower class" tends to get referred to as "the working poor" or, depending on the political angle involved, somebody might refer to "people on welfare" when they effectively mean the lower class.

Meanwhile, instead of "upper class," people say "the wealthy."

I suspect we might be uncomfortable with the terms "upper class" and "lower class," because they have connotations of some degree of non-mobility to them---"upper class" brings to mind people who are born rich and raised rich and come into their inheritance of an education and job that keeps them rich, and "lower class" carries an impression of people who were born poor, didn't go to college, and thus didn't qualify for a good enough job to get them into the middle class ("lower class" seems to include part of the working class identity, especially when lack of intellectual pursuits are assumed). There is a hint of an impression that an "upper class" or "lower class" person is particularly suited for their class level or would, if removed from it through financial windfall or disaster, naturally rise or fall to return to it.

Well, one way to look at it is that when the economy is in trouble and inequality is high, the middle class is ABSOLUTELY what you need to be talking about. It's the most newsworthy topic. A large middle class is essential for a robust and stable economy as well as preventing political and civil instability, and the state of the middle class is an excellent bellweather for the economic state of the country. In other words, they talk about it more because it is MORE IMPORTANT, and they call it class because the middle class is important as a group, while the upper-class are more important economically as individuals (since their economic clout is  bigger) and the poor aren't considered economically valuable at all.

I can't tell the difference between "upper class" and "no class." This is partly said in jest, but seriously, if you design graphs, choose your colors wisely!