Life’s Short, So You Better Start That Affair Right Away

Two years ago we posted about the Ashley Madison Agency. Several readers brought our attention to a new ad campaign for the company, so we’re reposting it; scroll down for new material.

Lisa C. sent in a link to the Ashley Madison Agency, which she heard advertised on a talk radio station that generally targets a male audience. The site specializes in providing dating services to married individuals looking to have an affair: 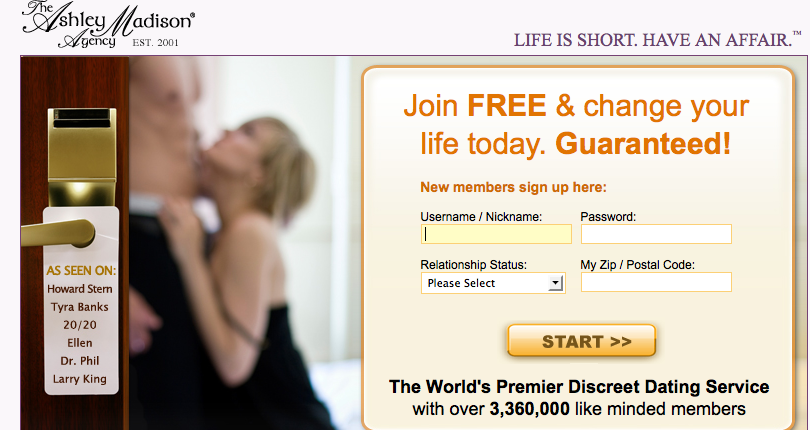 The company clearly plays on its notoriety and the shock value of the idea that a dating site would cater to married people looking to cheat on their partners — as well as, in this case, appearing to promise men oral sex.

The company has come out with a new ad campaign that has received significant criticism. The ads, sent in by Danielle Q., Christie W., and an anonymous reader, combine “promotion of adultery, body shaming, and female objectification,” according to Christie. They present wives as fat (and therefore presumably unappealing) women who practically drive men to cheat on them with the thin, hot women they deserve to have sexual access to: 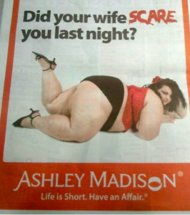 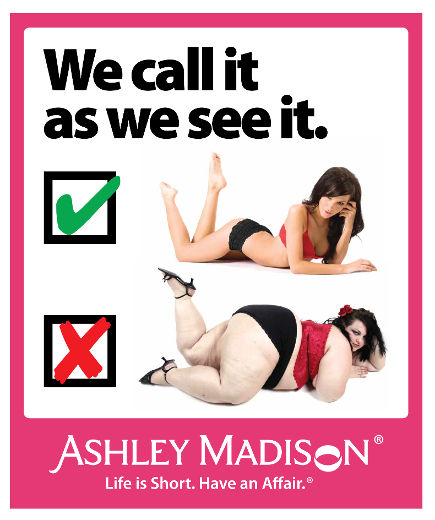 One source of criticism comes from Jacqueline, the plus-sized model used in the two images. She apparently posed for a photographer years ago and is now faced with seeing her image used to elicit disgust at large bodies. As Jacqueline pointed out in a post she wrote for Jezebel, these images aren’t just about mocking large women; they’re about policing all women’s bodies:

Thus, all women are told that they are perpetually in competition with all other women for the sexual attention and approval of men, and always on the verge of being ridiculed for the failure to meet impossible standards of feminine attractiveness.

I dunno, giving oral sex to men other than your husband sounds kind of good to this guy. (not that I could marry my man - but you get the idea)

Hey if thats the way you roll, who am I to stop you? I dont believe in the sanctity of marriage. I believe in peace & love!

A quick google suggests that Ashley Madison is a case of buyer (or in this case cheater) beware--it's got a setup where users must pay to contact other users, and there are people alleging that many of the profiles of women on it are fake and attempts to entrap men into spending more money, and that there is in fact a large gender imbalance.

One wonders if they're even bothering to advertise to women at all. . .

The things people come up with when prostitution is prohibited.

There is also the shaming of men and women who find the larger woman desirable. It's not just policing women's bodies. It is policing the desires of those who are attracted to fuller figures. That helps no one.

And of course there's the double standard and entitlement of the ad. No reference whatsoever to the husband's size, one assumes that he "deserves" to sleep with super models regardless of how he looks. The wife however, doesn't even deserve to know that her husband respects her so little that he'll keep her around while chasing other women

I realise that this post is very gendered by the way, does the site offer services to same sex couples?

The mere existence of this as a marketable, potentially quite successful business just serves as yet further illustration that the "sanctity of marriage" is a giant crock of BS. What, our laws allow people to cheat as much as they like, get divorced as much as they like, have children and then have embittered custody battles over them as much as they like, so long as they are straight? God forbid a loving same-sex couple wishes to spend their lives in monogamous bliss. Grrrrump.

That's some wretched 'shopping right there.
I'm talking about Ms. Green Check. The torso looks like it's been elongated and the bra in relation to the breasts is wrong and her left leg must be double the size of the right. The more I look at it the weirder it gets.
Also, it looks like she's been caught chatting on her cell phone, whereas Ms. Red X is looking straight at the camera.

The very idea that any person would be influenced in any way by this ad makes the label "homo sapiens" an oxymoron.

Not saying anything against the post, nor am I condoning what I'm about to say.  But guys are not left out of this -- that is, guys are under pressure as well to stay in top shape, to stay skinny, to stay attractive.

You don't see Cialis commercials with anything but skinny, attractive middle aged men, generally playing football, certainly not working behind a desk.

I guess I just feel that this type of criticism, while warranted, is missing the larger issue, which I think is something about how society as a whole is constantly bringing those who are more universally thought to be "attractive" to the front, which only makes the rest feel less attractive.  Is that a good/bad thing?  I don't know.  I certainly know that the drive to get/stay skinny is keeping me working out, which is making me more healthy, probably also helping my brain health (Staying focused, alert etc), which ultimately increases my financial situation, perhaps will make my future life more enjoyable and better for any kids that may come along.

Does this website cater to women who want to cheat on their husbands? I don't particularly want to go to the website to check. I won't comment on the ethics of a dating agency that allows people to have affairs, but what's making my blood boil is the idea that men, no matter who they are, what they are like, or what they look like, are entitled to have sex with a conventionally attractive woman rather than the 'undesirable' wife stereotype. I also hate how often 'wife' is used as a dirty word, encapsulating all the negative female traits, physical or emotional.

This was my reaction:

This is so preposterous I have difficulty even being outraged. I want to see their business model so I can laugh even harder.

Yeah, and there are so many women looking to have sex with 400 lb men because women don't objectify men's bodies.

In addition to what has been said, one thing that does not ring true is that this a site which married males and females go seeking a person for an affair. Do singles also use the site? If not, the ad could be a turn off because if all wives are perceived as sexually unattractive and the site only contains profiles of other wives, the "approved" body doesn't/shouldn't exist on their site amongst the profiles.

Omg. Like men dont have to compete. Be exciting funny sensitive buff have money not be bald, be able to perform (get it up). Be a protector. Theres a whole list. Womens requirements are much simpler. Is it right? Maybe not. But is it sociological or anthropological? What society doesnt have tough requirements for potential mates?