Stacey Burns wrote in to tell us about her successful effort to fight an ad campaign that objectified women and trivialized sex work.  She explains:

USI Wireless, an Internet provider that has a ten-year contract to provide wireless to the city of Minneapolis, recently launched a new ad campaign promoting its service. The ad features the image of a young woman who we are clearly meant to read as a sex worker, accompanied by the text “FAST, CHEAP, and SATISFACTION GUARANTEED.” 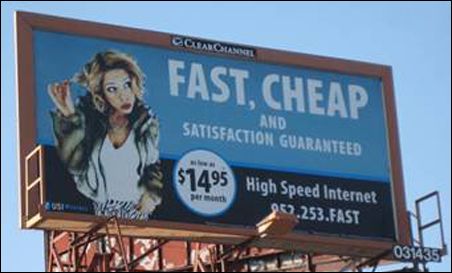 A photo of the billboard was placed on Facebook, which she saw on a friend’s page, and then re-posted with a critique.  She contacted the company, whose representatives were “polite but dismissive, telling [her] that they test-marketed the ad and it did well in focus groups.”  The photo of the billboard went viral and she took it to the City Council, who “responded to public outcry and succeeded in getting the ad pulled from the 12 locations it was posted” (story here).

Burns’ story is a nice example of how collective action, facilitated by the internet, can make a difference.

For more examples of this kind of resistance, read about fights against the Obama sock monkey, a Target ad, Mr. Wasabi, Frito Bandito, Motrin’s idea of motherhood, and the rebellyon.

It's always nice to hear sucess stories, it easy to feel as though things have to be the way they are, but that's not the case.

Also, regarding the ad, it's even more annoying when they do that shit with ads that are directed at all genders, you know, like women use the internet too. It wouldn't be acceptable, but more understandable if the ad was selling something solely used by men.

Was the issue that the ad is offensive to women or that it was offensive to people who don't like sex outside of marriage? I can imagine this generating controversy just because people don't like the idea of prostitution, stemming from conservative ideology. Is this a liberal feminist success story or a conservative anti-sex success story that happens to fall in line with feminist goals in this specific issue?

Dragonclaws makes a really good point. I just watched the documentary "F*ck" and I can't help but wonder *why* people want them to take the ad down. Speak out against the ad all you want; decry objectification; but, in the end, I wonder, should we demand that we be shielded from things we don't like or that we find offensive? Does this lead to a slippery slope of censorship? Does it lead to a goal we don't really like -- a society that values a specific kind of modesty, for example, or that dictates certain standards of taste? I'm a proud feminist myself, but I'm not sure that censoring is the answer. I'd love to know what y'all think....

Its not censorship when the expression is an action that hurts people (by perpetuating or creating a Harmful stereotype, that leads to hate crimes and violence and rape)or is a patently false statement meant to deceive people (100% natural cigarettes provide 9 essential vitamins and minerals, and your body absorbs them more efficiently when smoked -light up today).

The Left and Right all have the same issues in some weird way that makes me never understand why we don't team up and take on the real opponent, the Middle. Its like why don't the same sex marriage people and the Fundamentalist Mormons team up and kick the government out of marriage.

Interesting. Most of the commenters here appear to misunderstand the objection to the ad, as did the company:

"We didn't mean to offend anyone," Turner told MinnPost. "Our response to the overall situation is we didn't, and don't, feel that the spokesmodel from the ad looks like a prostitute. We've seen way worse."

I was wondering what they meant by "we've seen way worse" meant, but after reading this thread, I realize that most people here think feminists like lisa are against sex and promiscuity. The company thought the objection was against showing skin, when the model does not show much skin.

If you read this post properly, in the beginning, lisa says the ad "objectified women and trivialized sex work". "Sexual objectification" of women is not some kind of academic euphemism for "women are wearing revealing clothing". It means using women to symbolize or represent sex, when sex is something that occurs between men and women, men and men, or women and women. However, the idea that women=sex is so ingrained in most people that any critique of sexual objectification of women is interpreted as being against sex.

I blogged about this issue at http://workthatmatters.blogspot.com/2010/06/fast-cheap-and-satisfaction-guaranteed.html

To me, this is not a story about whether or not the ad violated some agreed-to community moral code. It is really a story about how social media have given individuals much more power to quickly build like-minded communities online and hit politicians and businesses where it hurts.

Advertisers have to meet certain standards when they post their ads publicly, but they also have rights. However, social media have created a new collectivism that doesn't care about codes or practices.

This could have been a story about fundamentalist Christians killing a pro-atheism campaign, pro-choicers killing an anti-abortion campaign, feminists killing a sexist campaign, or social conservatives killing a campaign that showed nudity in any context.

Communities have much more power than they ever have to determine their own standards through consensus and mass lobbying. But this new "mob rule" also scares me, because it side-steps all the political, legal and constitutional controls that democracies have put in place to maintain a more rational just society (rather than one big angry lynch mob).

I may sympathize with the people who won this battle. But as a person in the ad industry, I also realize that this same lobbying power is available to people who don't agree with me. The culture wars are now online. And it is going to get bloody.

Why, exactly, is she a sex worker? The ad seems to have roughly the same copy as the only other ad I could find for this company (at their website, http://www.usiwireless.com/).

I'm not willing to give the people responsible for that baby-smoking-a-bubble-pipe bon mot credit for the subtle wit that the people protesting it are. This seems like a misunderstanding, especially given the statement where they SAID that she's not a sex worker.

I LOVE Crab's explanation. That is exactly the issue. Aren't we clever? We refer to women and/or sex work as something super hee-hee hilarious. "Cheap" (hee-hee), "Satisfaction Guaranteed" (hee-hee). "Fast" (hee-hee). It is offensive to ANY woman. To a neighborhood that suffers from the exploitation of underground/underaged prostitutes it is a double slam. This is a VERY progressive neighborhood (the People's Republic of Minneapolis and our congressman is the first Muslim in US Congress). We are offended by the objectification and the snarky response from the company. Funny that Clear Channel was our "in" but the results are satisfying none the less.

This reminded me immediately of ads that Victoria Clipper is running right now in Seattle. The Clipper is a lovely boat that will take you from Seattle to Victoria BC affordably, and I've been wanting to try it, but their advertising is so horrendous I'm rethinking that. They just put up billboards that say "Victoria's Cheap (But She'll Show You a Great Time)". Seriously? I'm a writer who works in advertising, and I'm offended by that billboard first because it's SO stupid and such a cheap joke (no pun intended), just like the one above. I mean, seriously -- any twelve-year-old could have come up with that in ten minutes. The objectification of women is doubly offensive and just as thoughtless. Seriously, there are no better thinkers in their marketing departments than this?

That's interesting because I love that Victoria billboard. As someone with over 28 years in the marketing industry I think that's a smart approach to changing their marketing approach. Look, it's got us talking hasn't it? In my experience a campaign is going to offend someone somewhere. They're obviously trying to 1) get attention and or 2) appeal to a younger audience. Kudos to them for taking a chance and for having a smart, fresh approach to marketing.

[...] recently posted about an ad for internet service that used the metaphor of a prostitute.  It/she was “fast” and “cheap” with “satisfaction [...]