Katrin noticed something interesting about the coverage of the Farmer’s Weekly competition for Britain’s sexist male and female farmer, Pete Mortimore and Anna Simpson. 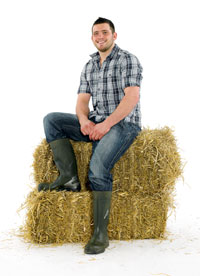 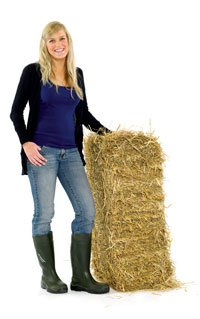 Of the (so far) 12 newspapers mentioning this, 11 focus solely on Anna Simpson: She’s the only one mentioned in the article’s title, there are huge pictures of her, videos of her and there is NO picture of Pete Mortimore, he is barely mentioned at all, never in the title (in some of the texts there is a half sentence in the middle of the article mentioning him: “Pete Mortimore, 25, has been voted Britain’s sexiest male farmer”, but that’s ALL).

For example, the Telegraph: 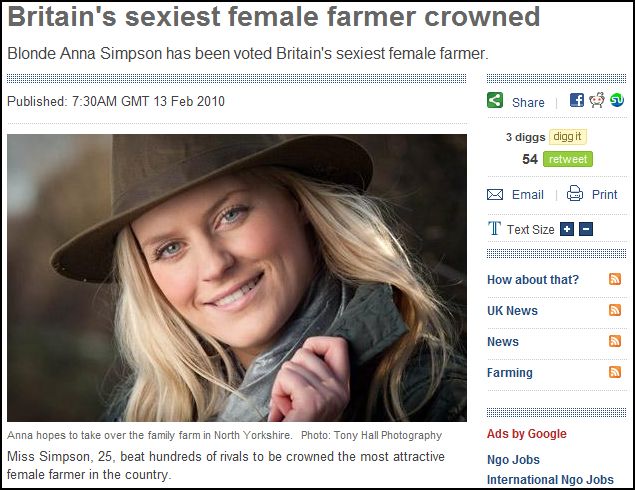 More examples of the focus on Simpson include the following headlines:

The single exception, which has a tiny picture of him, is his own local newspaper. 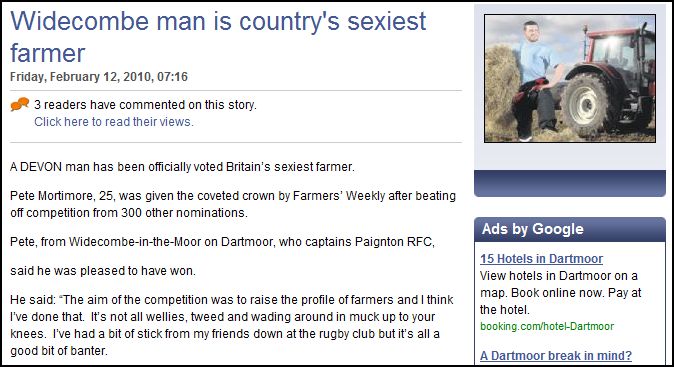 Katrin thinks this is a great example of the way that the straight, male gaze shapes news coverage.  The coverage in these newspapers, ostensibly for both male and female, gay and straight readers, nevertheless covered the competition as if all of the readers are primarily, or only, interested in the hot chick.

There's a potentially confusing error in your first paragraph. It says 'sexist' but should say 'sexiest'.

If you read the news in the local newspaper, notice the farmer says: "I've had a bit of stick with my friends down at the rubgy club but it's all a good bit of banter". So, apparently being sexy is a thing that deserves being teased. Quite clearly, men are not supposed to be sexy, as that makes you vulnerable, I think.

If you look at video results ( http://video.google.com/videosearch?q=britains+sexiest+farmer ) there are 6 for pete and 2 for anna. I wonder why video would be different?

I see your point, but as for the "straight male gaze," don't forget that some lesbians may be just as interested in the female farmer.

I find it interesting that, as usual, they refer to Anna as a "blone" and "beauty" rather than a woman. When they talked about Pete, is was as the Widecombe MAN rather than "brunette" or something.

However, with Anna you have an irony angle. There's no stereotype that *expects* farmers to be young blonde urbane-looking women, nor a popular notion that farm work is feminine or sexy in a female way, even though women have done as much farm work as men for thousands of years. Anna's appearance may not challenge any pop notions of what makes women sexy, but it will make a lot of people think differently about who's doing farm work. Man bites dog, sort-of.

Were it not for this angle, it's hard to imagine the story getting reported at all in rags as big as the Sun and Telegraph. Farmer's Weekly is a low-circulation specialist mag (under 70,000 readers), never a newsmaker in itself, and Britain has no shortage of beauty/talent contests to pad out puff pieces in the "news" (using that term loosely).

As for the (hetero) male gaze aspect...well, you cited The Sun, which has featured bare boobs on Page 3 everyday for 40 years. You could hardly ask for an easier target.

Actually, Andrew, you raised an interesting point in my mind: While Pete is wearing something "Fashionable" and clean he certainly looks like he'd be comfortable wearing those things if he was doing the farm chores. Anna, on the other hand? Tight jeans I don't think she'd be able to move about in easily, what appears to be a thin cotton shirt, and a loose hanging cardigan, plus, her hair is NOT tied back, but hanging loosely and freely. The only thing that really fits is the rubber boots! So what does that say about how Anna was expected to dress vs. how Pete was expected to dress for this photo shoot?