I’ve got a special treat for you today: an interview with artist Nathan Meltz about his pieces on industrial food production. Nathan has shown his art in group shows around the country.  He received a Master’s degree in Art from the University of Wisconsin-Madison and is currently a graduate student at SUNY-Albany, where he will be graduating this spring with his MFA.  He lives in upstate New York with his wife, Abby Kinchy, and their infant son Aldo. His artistic and musical exploits can be followed at The House of Tomorrow.

I went to grad school with Abby, so that’s how I knew about Nathan’s work. As a sociologist who specialized in food issues and rural communities, I immediately loved these pieces and thought many of our readers would too, so I convinced Nathan to let me post an interview and some of my favorites. (And be forgiving of my amateurish interview questions. I am not a Creative Type, and my general reaction to art I like is “You made a pretty!”) 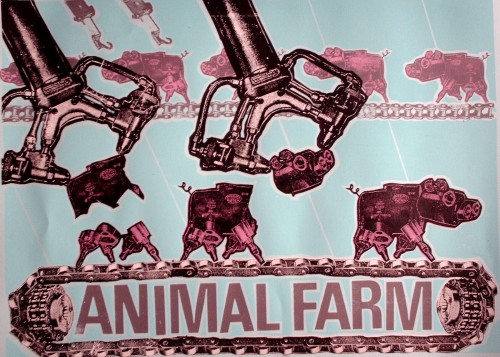 What drew you to the issue of food?

I have to give a lot of credit to Abby, who is a sociologist at the Rensselaer Polytechnic Institute, and has done a lot of research on controversies surrounding genetically-modified corn and canola. [She’s currently working on a book about conflicts over genetically modified crops in Canada and Mexico.–Gwen].  A lot of the themes in my art developed from kitchen-table discussions we had while in grad school in Madison.  What was technology doing to agriculture? And then, from my end, what would it look like?

How did you come up with the idea of representing food products as machines?

I wanted a visual metaphor that would reveal tech taking over plants and animals.  Unfortunately, our most current tech can be hard to visualize.  A series of ones and zeros?  Some sort of digital technology?  I decided to combine elements of Dada collage with early modernist German machine aesthetic [Oh, yes, the early modernist German machine aesthetic! Of course!–Gwen]  to create my own visual vocabulary. One that, while not exactly 21st century, would act as a symbol of science and technology for the viewer/audience.

What does your Animal Farm series convey about our modern food system?

Waiting for My Mechanical Bull 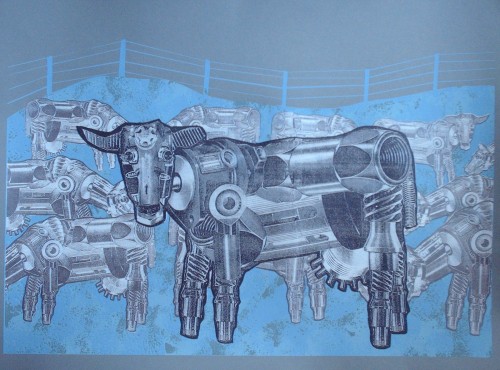 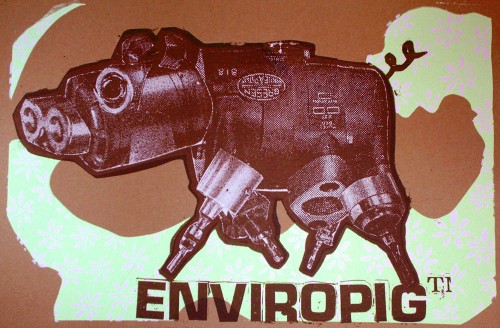 In my machine world, animals are put on assembly lines, cramped together in feed lots, and, in the case of the chickens in The Chicken Coup animation, reside in an agricultural system designed by sadists.  They all look the same because there is no diversity on the factory farm.

Many people have at least some knowledge of slaughterhouses and the treatment of animals, so the Animal Farm series is probably fairly accessible. But O Canola! is, I think, more complex and harder to understand if you’ve never thought much about bioengineering before, or why the song “O Canada” would be particularly meaningful in the context of discussing canola and bioengineering. 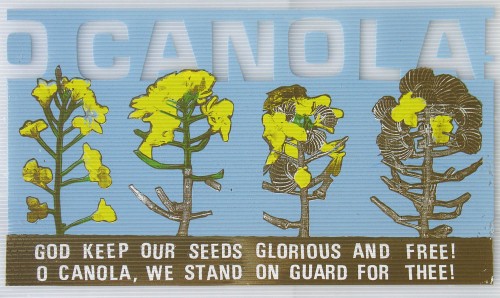 O Canola! was a project long in the making, very much piggybacking on the research Abby was doing at the time. I try to tell the story of Canada’s GMO [genetically modified organism] canola contamination* in a visual form. The clever riffing on the Canadian National Anthem (which Abby thought of) is meant to reflect the nationalist tensions inherent in the controversy, where a hybrid plant created by the Canadian government during WWII to produce a mechanical lubricant at the local level would years later be threatened by GMOs produced by agribusiness.

What about Food for Fuel? 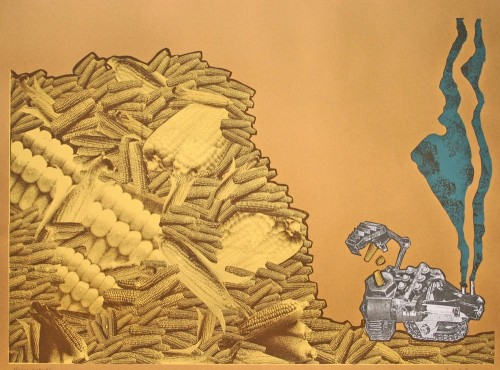 Food for Fuel came after news reports kept coming in about food shortages around the world, particularly in Mexico, because so much edible food was being turned into fuel for vehicles.  The message on this one is pretty straightforward.

Food for Fuel, along with Animal Farm, definitely reflects my interest in Agitprop.  At the time I made these, I was sharing a studio with printmaker/activist Josh MacPhee, a member of the Just Seeds print collective, which promotes socially activist printmaking.  A lot of the work he was doing really influenced me, and I think these two prints reflect my desire to have a clear social message.

Reaction has been positive, or at least the reaction I hear about.  A lot of the prints have traveled around in various shows.  I think the animation The Chicken Coup has maybe received a little more attention than the prints among the art audience.  Static prints on paper have a hard time competing with moving images with sound, music, etc.  And I don’t think people care any less about the crop-based works than the animal ones.  I find people who are really into food/agriculture issues care just as forcefully about what is happening to corn as they do cows.

* GMO contamination occurs when genetically modified seeds migrate to fields that were not intentionally planted with them, an increasingly common occurrence. Aside from the problems this can cause farmers who want to sell their products as specifically not GMO, and concerns about the ecological effects that could occur if modified genes spread into other varieties (or even related wild species), it also puts farmers at legal risk. GMO crops such as marketed under the Roundup Ready label and engineered to be immune to the effects of Monsanto’s weedkiller Roundup, are patented. Farmers are not allowed to plant them without buying a license (including saving seeds from their own crop to plant the following year, a traditional practice of many farmers to eliminate the cost of buying seeds each year; so-called “terminator” varieties are even engineered to produce only sterile seeds, thus ensuring farmers must buy fertile seeds from the manufacturer annually). Monsanto has sued farmers for patent infringement in cases where a field was contaminated with Monsanto’s GMO seeds when they blew in from a neighboring field. Conversely, a group of Canadian organic farmers sued Monsanto on the grounds that genetic contamination had made it impossible for them to sell their products as organic.

If you’re interested in the topic, you might try to get a copy of Abby’s new article, “Anti-Genetic Engineering Activism and Scientized Politics in the Case of ‘Contaminated’ Mexican Maize,” Agriculture and Human Values.

The best visualization of mechanized agriculture is a person eating, because without it, most people alive today could not, and those that cannot eat are largely those without access to it.

I can't help but wish that first image was photographed better! It looks like a nice print but the bend and the cropping ruined it for me.

I loved Chicken Coup - it was so chilling (especially the debeaking), but also a really amazing-looking piece of animation.

Hey, Very nice work! But i have dawn syndrom and i don't understand it very well. Please send me an e-mail: pieterjan_loveniers@hotmail.com